2018
18th December I accepted an invitation to join the European Science Foundation's College of Expert Reviewers, for a 3-year term

19th July   Congratulations to Paxton Culpepper, who has had his first paper accepted today, in Frontiers in Evolutionary Psychology

6th July   Along with Jan Havlíček and Benoist Schaal, our proposal for a Royal Society discussion meeting on Advances in human chemosignalling has been selected for the 2019 scientific programme.

1st April   Welcome to Faize Eryaman, who has started her PhD on aspects of relationship functioning and attachment

11th October  I have been invited to give a plenary talk on psychological effects of hormonal contraception at the 2018 meeting of the International Society for the Study of Women's Health, in San Diego

1st September   Welcome to Francesca Singleton, who has started her PhD on hormonal contraceptive effects

4-7th June  I organised the 6th ISHE Summer Institute, held at Boise State University, Idaho
​
11th May  I wrote an article on the underestimated human sense of smell for The Conversation
​

2016
1st October    Welcome to Irena Pavela Banai, joining us to work on hormonal variation and voices

12th May     Julia Baumann and I have won a Biomedical Vacation Scholarship from the Wellcome Trust, for Julia to work on some body odour method development over the summer

10th May     Irena Pavela, a Croatian PhD student, has just won a British Scholarship Trust award to work with me in Stirling for two months this coming autumn.


2015
12th November      Our garlic work, published in Appetite, with Jitka Fialová and Jan Havlíček, has been attracting a lot of media attention.

8th August     I gave an invited talk at the Contraceptive Conundrum symposium in Washington DC, and was interviewed for Ricki Lake's upcoming documentary on hormonal contraception.

16th July     I was filmed and interviewed for a Czech TV production on the hormonal contraception work of me and my Czech collaborators, Jan Havlíček and Kateřina Klapilová.

20th May     My latest article for The Conversation, Why the'love hormone' might be less rosy and more rosé than we thought, has been published, and republished as The darker side of 'the love hormone' by Discover Magazine

13-16th May    Some of us attended the 2015 meeting of the International Society for Human Ethology in Athens. Caroline Allen gave a talk and a poster. The latter, "Effect of fragrance use on discrimination of individual body odour", won one of the poster prizes. Congratulations Caroline!


Well done also to Francesca Singleton, who presented her first conference poster, on her MSc dissertation research. I gave a workshop on "Promoting your research".

2nd-3rd May    Paxton Culpepper and Francesca Singleton began several weekends of exhibiting our work and recruiting participants through a "Meet the Scientist" exhibit at the excellent Glasgow Science Centre.

6th March     My article on hand-smelling after handshaking in The Conversation has been picked up by IFL Science and The Guardian, and has had about 80,000 readers

13th February    In celebration of Valentine's Day, I published my first article in The Conversation, on perfume purchasing, with Kelly Cobey and Caroline Allen

1st February    As the deadline for abstract submissions for ISHE 2015 closes, the Chair of the Programme Committee gets busy!

30th January    We said farewell to Vít Třebický and Jitka Fialová as they return to Prague. Díky! Až příště!

6th January    Welcome to Paxton Culpepper, who is joining us to do a PhD in the area of mate preferences and oral contraception, and initially to also work as a Research Assistant on a face perception project for Boots plc.

1st January     Kelly Cobey started her Fyssen Foundation fellowship, in a collaborative project between us in Stirling and Prof Patrizia d'Ettorre at the University of Paris

27th November     We said goodbye to Imran Shah, from Imperial College London, who has spent this week with us collecting data on odour changes following treatment for prostate cancer.

24th November     I gave a talk on effects of oral contraception on relationships to the Faculty of Life Sciences at the University of Manchester.

7th November     Welcome to Pavel Šebesta, also from Charles University in Prague, who will be here for around a month.

5th November     I have been organising Stirling Crucible over the past three months, and the last of 3 two-day labs ended today. It's been really interesting interacting with so many excellent researchers from different disciplines.

28th September     Congratulations to my Czech colleagues and friends: Jaroslav Flegr and Jan Havlíček, for winning this year's Ig Nobel Prize for Public Health, for "investigating whether it is mentally hazardous for a human being to own a cat", also known as their intriguing work on psychological effects of toxoplasmosis. Sooo impressed!

9th October     Welcome to Vít Třebický and Jitka Fialová, from Charles University in Prague, who will be working here in Stirling for 4 months.

﻿5-9 August     I presented a poster on oral contraception and relationship satisfaction, and a talk on androstenes, at the 22nd Biennial Conference of the International Society for Human Ethology, in Belem, Brazil.

28 May     My student, Juan David Leongómez, has had his paper on cross-language similarities in vocal modulation and perception during courtship accepted at Evolution and Human Behavior. It has been an incredibly long and arduous process - but a richly deserved outcome.

13 May    Our paper on Partner Choice, Relationship Satisfaction and Oral Contraception: The Congruency Hypothesis, in Psychological Science, has been published and already being picked up online

30 April    I have been appointed as the Program Chair for the 2014 congress of the International Society for Human Ethology in Belem, Brazil 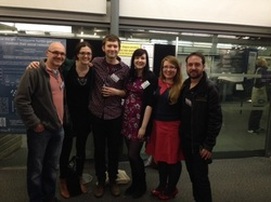 6-9 April    K﻿elly, David and I all gave talks at the EHBEA conference in Bristol, on relationship satisfaction and oral ﻿contraception, voice perception and mate preference, and androstenes in male odour, respectively

Pic: Stirling bods at EHBEA, Bristol, 6-9th April 2014.
From left: Craig, Kelly, Eoin, Caroline, Mary, David
20th March    I have been named by Proceedings of the Royal Society B as one of their "Top Reviewers in 2013"

10th February    I was interviewed talking about effects of oral contraception and odour in human mate choice on a Valentine's Day special of the BBC Radio Scotland programme, Brainwaves

29th January    I gave a talk on production and perception of androstenes in the Dept of Zoology at Charles University, Prague

9th January    Welcome to Mike Nicholls, who has joined the group on a 6-month research assistantship

3rd December    The special issue of Human Ethology Bulletin to celebrate Tinbergen's influence on human ethology, which I edited, has now been published here.

31st October    I have accepted an invitation to become President of the Applied Evolutionary Psychology Society, my term beginning 1st Jan 2014.

17th October    I gave a talk on odour and fragrance at the Annual Forum of the International Fragrance Association (IFRA), held at the Royal Society, London

7-9th August    I gave two talks on effects of oral contraception on mate choice and desire at the International Society for Human Ethology Summer Institute, in Ann Arbor, Michigan.

27th March    Our new paper, on pill use and partner's facial masculinity, has been receiving press interest on LiveScience

20th December    I have been invited to join the Editorial Board of Journal of Social, Evolutionary and Cultural Psychology

19th December    A special issue of the journal Evolutionary Psychology (issue 5, 2012), edited by me, Mark van Vugt and Robin Dunbar, has been published. The issue is titled "Evolutionary Psychology in the Modern World: Applications, Perspectives and Strategies", and can be seen in the Archive here: http://www.epjournal.net/

3rd December    I gave a talk at Charles University, Prague, on "Promise and prospects for applying evolutionary psychology"

10th September    Welcome to Caroline Allen, who has arrived to start her PhD on body odour and fragrance psychology

7th September    I gave a talk at the British Science Festival in Aberdeen, as part of a joint presentation on "Dating, mating and relating: the science of human attraction", with Tony Little, Lisa DeBruine, Tamsin Saxton, Fhionna Moore, Dave Perrett, Amanda Hahn and Carmen Lefevre

3rd September    Along with Scottish Crucible colleagues at Glasgow Caledonian University, Strathclyde University and University of Abertay, I received a small grant from NESTA (National Endowment for Science, Technology and the Arts) for a joint project: "Hands on Hygiene: increasing handwashing in healthcare"

30 August    I gave a talk on applying evolutionary psychology, at the University of Dundee, to an excellent workshop for Scottish researchers, organised by Fhionna Moore

13-16 August    I attended the biennial congress of the International Society for Human Ethology (ISHE), at the University of Vienna. As a member of the programme committee, I also judged the poster competition - very tough!

1 April    Welcome to Kelly Cobey, from the University of Groningen, who is working with me in Stirling for the next 18 months or so, and to Jim Swaffield who has started his PhD on evolutionary consumer psychology

26 March    I presented a talk on oral contraceptive use and relationship satisfaction at the University of Durham, at the annual meeting of the European Human Behaviour and Evolution Association